WHY: TO IMPROVE THE PACKET TRANSPORT NETWORK PERFORMANCES

Mobile networks have been constantly evolving driven by the introduction of new generations radio access network (RAN). Microwave products have evolved with it from simple TDM pipes offering connectivity for 2G GSM to the new generation packet microwave radio, offering full carrier Ethernet functionalities for 4G LTE. This has changed the role of microwave backhaul to a fundamental and critical part of the IP transport, where its dense capillarity and nationwide coverage represents one of the technology with the highest numerosity in the field.


With the packet transformation, the microwave network-elements are active nodes in the end-to-end solution, handling QoS, aggregation capabilities, queuing and buffering directly interacting with real time traffic.
As network intelligence is becoming distributed throughout the network elements in the whole network, a higher awareness of each network elements and of the behaviour of the network may prove fundamental to improve the network performances.

SIAE MICROELETTRONICA believes in improving the packet network performances. A better integration between packet microwave and the surrounding IP network offers big advantages in terms of:

SIAE MICROELETTRONICA and CISCO developed the Microwave Adaptive Bandwidth (MAB) feature to provide reliable QoS management, optimizing performances for both ring and non-ring based topologies, even under worst-case radio propagation conditions, and better awareness of the variable air bandwidth.

Routers connected to microwave radios are not aware of link capacity changes, as it would happen with a microwave radio link with adaptive modulation. To a router either there is connectivity and consequently a defined capacity, or there isn’t. The IP joint solution allows SIAE MICROELETTRONICA microwave radio to interact with the CISCO ASR router family by notifying changes in the available bandwidth and consequently triggering protection mechanisms or traffic shaping to ensure service SLAs are respected. This also ensures best air bandwidth utilization.

One of the applications is the use of adaptive modulation in ring topologies. Today inapplicable due to the lack of communication between the microwave transport equipment and the networking routing equipment.

SIAE MICROELETTRONICA and CISCO developed the Microwave Adaptive Bandwidth (MAB) feature to provide reliable QoS management, optimizing performances for both ring and non-ring based topologies, even under worst-case radio propagation conditions, and better awareness of the variable air bandwidth. 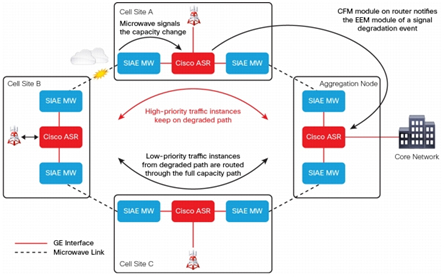 In microwave rings topology adaptive modulation is not employed as when the capacity changes on one leg of the ring the protocol running on the ring is unable to compensate, protect or even realize that something has changed.
Employing the MAB functionality, the microwave radio notifies the adjacent router that available bandwidth has changed, allowing the router to trigger protection mechanism or react by changing the traffic shape. 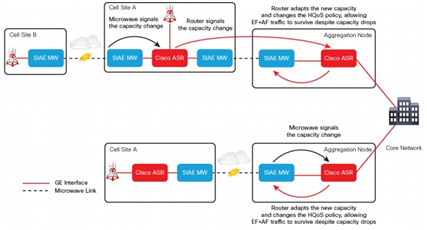 If you not change browser settings, you agree to it. Learn more

To make this site work properly, we sometimes place small data files called cookies on your device. Most big websites do this too.

A cookie is a small text file that a website saves on your computer or mobile device when you visit the site. It enables the website to remember your actions and preferences (such as login, language, font size and other display preferences) over a period of time, so you don’t have to keep re-entering them whenever you come back to the site or browse from one page to another.

Enabling these cookies is not strictly necessary for the website to work but it will provide you with a better browsing experience. You can delete or block these cookies, but if you do that some features of this site may not work as intended.
The consent can be withdrawn at any time.

You can control and/or delete cookies as you wish – for details, see aboutcookies.org. You can delete all cookies that are already on your computer and you can set most browsers to prevent them from being placed. If you do this, however, you may have to manually adjust some preferences every time you visit a site and some services and functionalities may not work.